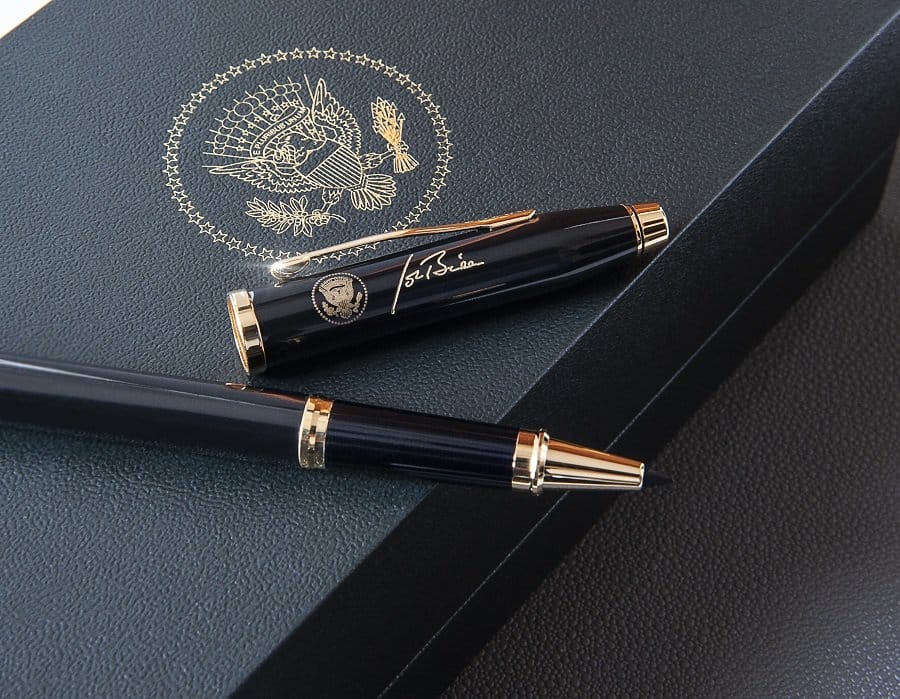 During the Clinton administration, Cross became the official source of custom writing instruments for the President’s legislative signing ceremonies, crafting commemorative pens emblazoned with the Presidential Seal and the President’s signature. The Cross Century II Pen used by President Biden is an icon of the Cross Collection, highly-regarded for its quality craftsmanship, distinguished style and exemplary writing performance. Notes Marketing Director Shepherd, “One of the distinctive features of the Cross Century II Rollerball Pen is that it offers a customized writing experience.” The pen is designed to be easily convertible into a Felt-tip Pen or a Ballpoint Pen simply by changing the refill. President Biden’s Century II Pen featured the Felt-tip refill as well as an exacting replication of his signature and the Presidential Seal on the cap.

A.T. Cross was America’s first manufacturer of fine writing instruments, and the company is proud to be celebrating its 175th Anniversary by continuing its legacy of crafting iconic Presidential Signing Pens.
The Cross Century II Pen Collection is available for purchase at cross.com.

About CROSS
Celebrating its 175th anniversary in 2021, A.T. Cross Company is a global innovator of fine writing instruments, crafting some of the most widely recognized and best-selling pens in modern history. Since 1846, the Cross name has been synonymous with uncompromised quality, forward-thinking design and expert service. Generations have celebrated important milestones, both personal and professional, with a signature Cross pen. Today, modern, on-trend designs join time-tested classics in an ever-evolving collection of pens and accessories for those who value luxury in the everyday writing experience.