Sustainability initiatives that mean something 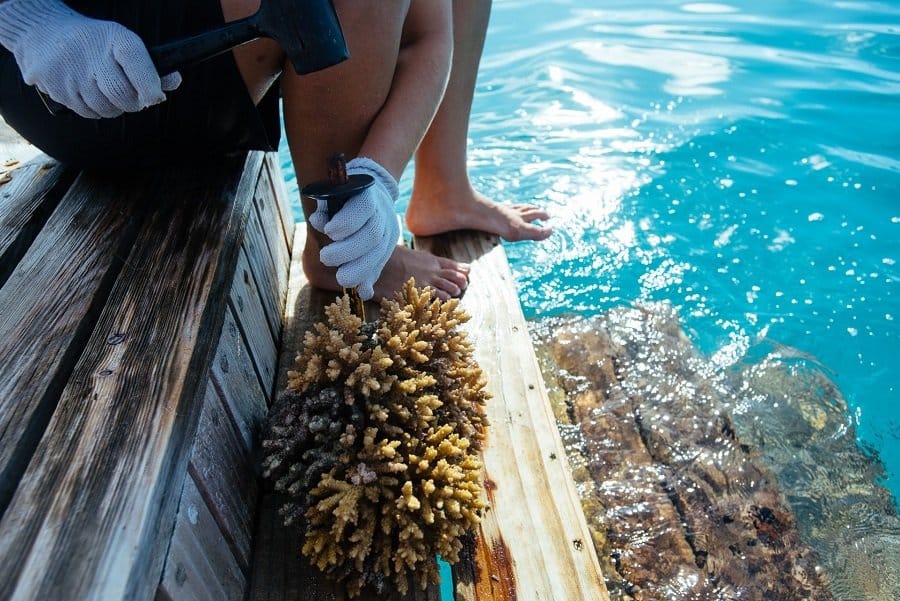 Green Pearls® Hotels are not only committed to sustainable development within their hotels but also to supporting regional and international projects. Guests are invited to participate in the projects, to contribute their time and expertise or even to simply donate. It is a way of offsetting the CO2 for travel on-site and benefits the local communities. 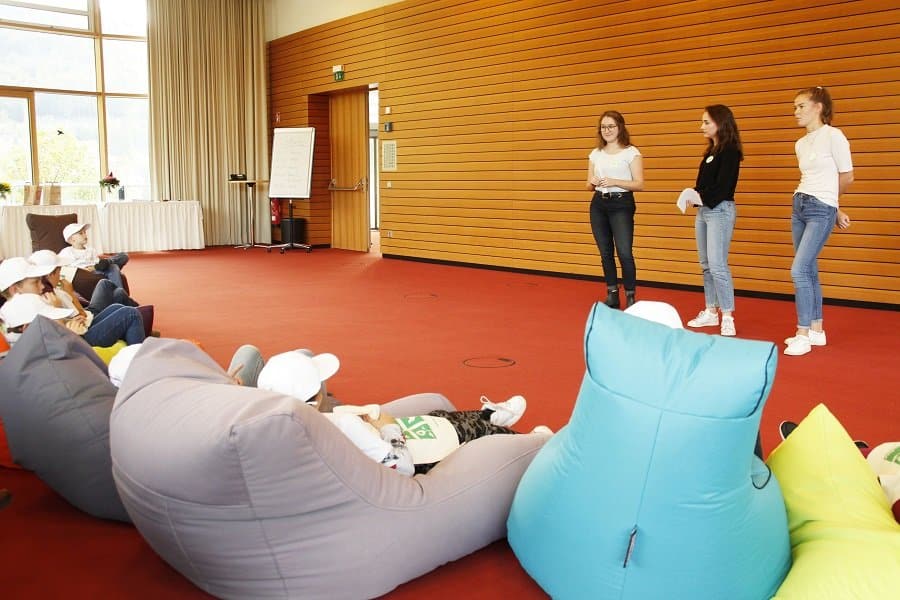 The aim was to teach primary school children in the third and fourth grades about food, how it is processed and environmental protection measures that can be put in place. A total of five events were held on the topics of harvesting, animal husbandry, food production and processing, cooking, service, nutrition, etiquette, sustainability, recycling, biodiversity and climate protection. The pupils were not completely unprepared, as the school already offered a nutritional “Driver’s License”. Stephanie Schießl was responsible for overseeing the entire project and is also the CSR representative of the SCHWARZWALD-PANORAMA. She was where everything comes together. Principal Patricia Fischer from the Falkensteinschule was in charge of the project and Martina Shakya from Heilbronn University was also involved as head of the Sustainable Tourism Development Department. The patron was District Administrator Helmut Riegger.

At the end of the project, it was planned that the children would invite their parents and all those responsible to coffee and homemade cake at the table they had set themselves. The Heilbronn University of Applied Sciences also presented the participants with a certificate after a small test.

For Stephan Bode, the goal was to give the children an opportunity to put into practice what they had learned and to commit themselves to sustainable development in the future.

Unfortunately, the project was discontinued after five sessions due to the Corona restrictions. However, the feedback from parents and responsible persons involved was overwhelmingly positive. 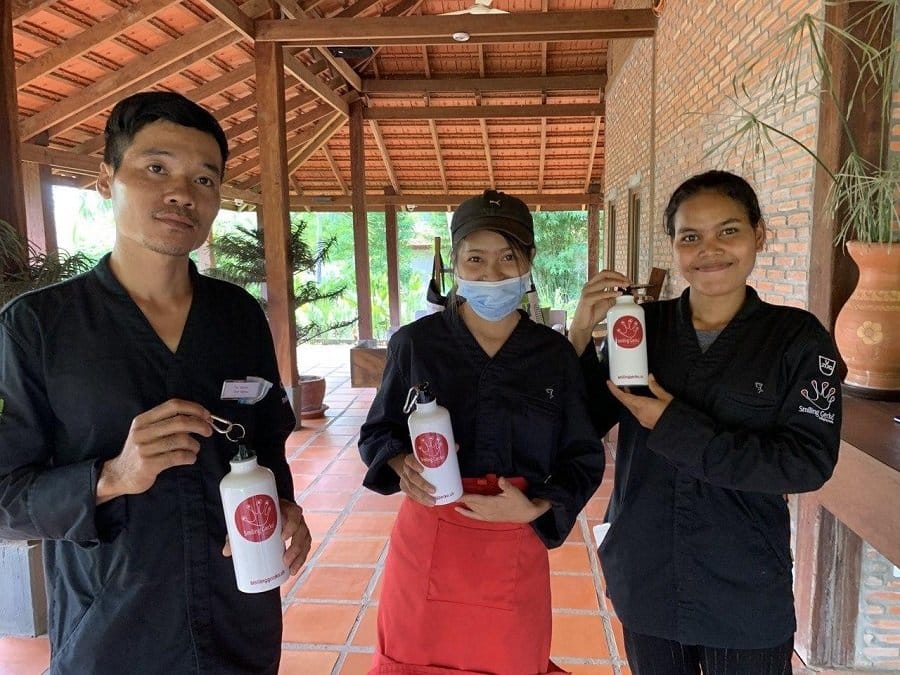 Farmhouse Smiling Gecko: Refill Not Landfill
The Farmhouse Smiling Gecko is part of the worldwide project “Refill the World”. Refill Not Landfill was founded in 2016 by Christian de Boer (Jaya House Hotels) and Dean McLachlan (JustRide Motorbike Adventures) and is a global campaign to reduce the amount of disposable plastic drinking bottles and other disposable plastic waste.

Refill Not Landfill aims to reduce plastic bottles and promotes the use of reusable drinking bottles. In doing so, millions of disposable plastic water bottles can be replaced and free water refill stations can be offered at participating companies and partners around the world.

The Farmhouse Smiling Gecko uses the refillable bottles on their tours and sells them in the small hotel shop. Refillable glass bottles are used in the guest rooms.

Keemala – Hotel Project Food Waste
The Keemala has managed, with great dedication, to create a 100% circular path for their food at the hotel. The organic garden covers almost 50% of the demand for ingredients. Different kinds of mushrooms, salads, morning glory, lemongrass, ginger, galangal, chili, basil, aloe vera and much more grows there. This significantly reduces the CO2 footprint both in the production and delivery of food and the farm-to-table concept means that guests always have the freshest possible ingredients. Some time ago, the garden was expanded to include more local green plants known for their immune-boosting properties, such as Malindjo leaves and green Chireta. The Keeemala works together with “Scholars of Sustenance” in Phuket and distributes unused food from the restaurant to disadvantaged communities and orphanages throughout Phuket. This helps to reduce food waste while also helping families and children in need. Compost not only helps enrich the soil and increase crop yields but also significantly reduces greenhouse gas emissions. Food waste from Keemala’s kitchen is composted daily in a simple process. 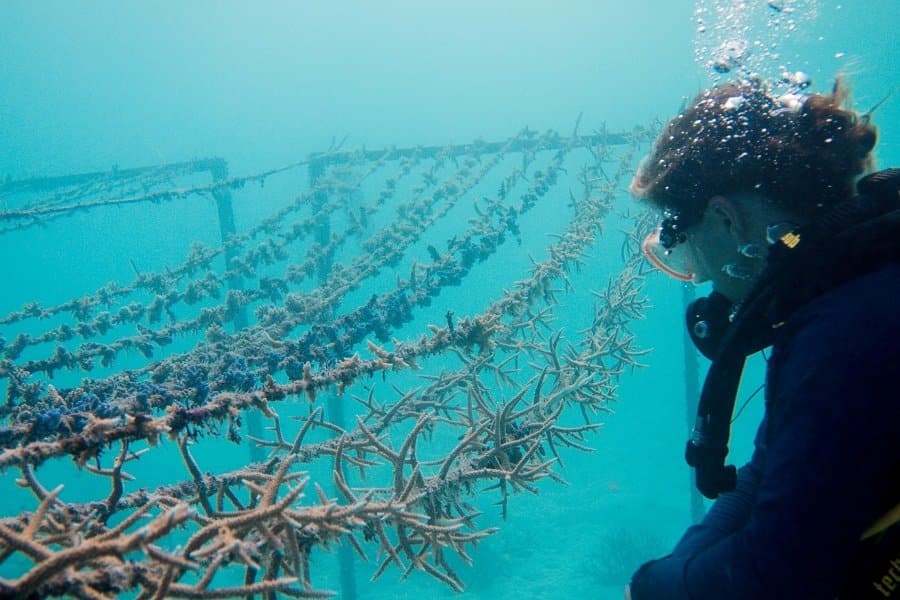 Gili Lankanfushi and marine life
The Eco-Luxury Resort is committed to minimizing its ecological footprint by implementing sustainable initiatives such as reducing energy and water consumption and effective waste management. Gili Lankanfushi works closely with EarthCheck, the world’s leading scientific benchmarking, certification and advisory group for sustainable travel and tourism, and received Silver certification in 2017.

Marine Biology and Nature Conservation
Two dedicated marine biologists work at the resort and support the ambitious Coral Line project. The aim is to protect and replenish the island’s house reef, preserve biodiversity and to alleviate periods of coral bleaching. The project started in 2014 and today the nursery has 160 coral ropes. Each of these ropes consists of 50 small coral pieces attached to a five-meter long rope which suspended from a frame five meters below the surface of the ocean. The growth of each coral fragment is closely monitored over a period of three years before it is carefully transplanted to the house reef. All data on coral growth is recorded in a master database and published online at lines.lankanfushi.com. Gili Lankanfushi’s coral nursery is very successful and the Gili Veshi team works closely with marine biologists in the Maldives to advise and help replenish the coral nurseries of other islands after coral bleaching occurs.

Seaweeds are considered the lungs of the ocean and are a vital part of the local ecosystem. They provide habitat for fish, crustaceans and young sea cucumbers, which serve as food for the local turtle population, while also helping reduce CO2 levels. Gili Lankanfushi is committed to protecting and replenishing the island’s seagrass beds and regularly monitors the regrowth of seagrass in the area surrounding the resort. 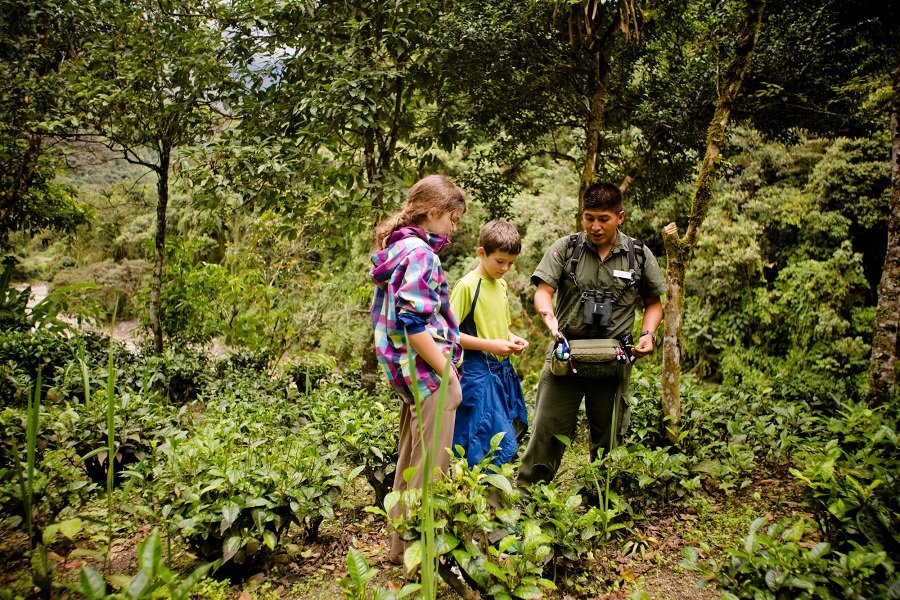 Inkaterra: Andean Bear Rescue Center
The only bear species native to South America is the Andean bear (Tremarctos ornatus). It lives in an area that stretches from Venezuela to Bolivia in the western Andean region which includes coastal deserts, foothill forests, cloud forests, evergreen forests, plains and highlands. It is listed on the IUCN Red List as an endangered species, which classifies it as threatened with extinction due to poaching and habitat loss.

In 2001, the Andean Bear Conservation Centre was established at the Hotel Inkaterra Machu Picchu Pueblo. Its mission is to study the rare bears that have been captured illegally with the aim of gaining a better understanding of their behavior in the cloud forest.

Currently, four bears are living in the sanctuary managed by the NGO Inkaterra Asociación (one female bear has even been successfully released back into the wild). The sanctuary includes an enclosure with trees, ramps and a freshwater pool, as well as a 2980m² area where two bears – a male and a female – have been released for reproduction and reintroduction into the wild. Skin and other medical checks are constantly conducted in coordination with the National Services for Nature Reserves (SERNANP).

Inkaterra Asociación, in cooperation with the Wildlife Conservation Society (WCS) and SERNANP, contributed to the publication of the National Andean Bear Conservation Strategy in Machu Picchu, a model for other wildlife management programs. 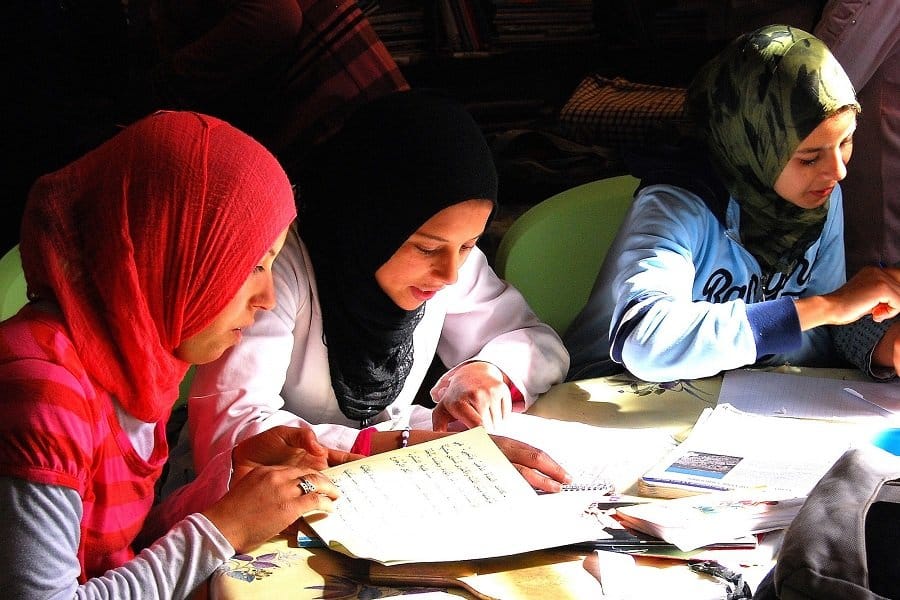 Kasbah du Toubkal and social commitment
In line with its commitment to local communities, the hotel charges a 5% fee in favor of the local village association “Association des Bassins d’Imlil” and “Education For All” www.educationforallmorocco.org. The Association des Bassins d’Imlil supports the needs of all of the surrounding valleys and provides the ambulance for the locals and guests. Other community projects that have been initiated include a waste collection system and provisions to the village of Hammam. Education For All helps to provide a college education for girls from the rural High Atlas. 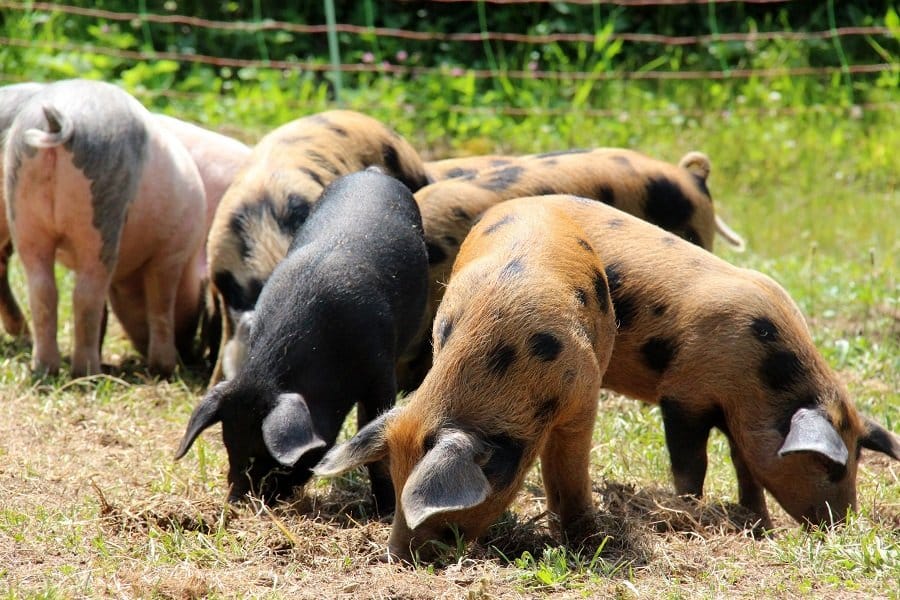 The climate-positive certified restaurant obtains 90 percent of all food from the region. Their meat and fish come exclusively from organic, small-scale farming, which initially posed a problem when looking for meat from pig farming that focuses on animal welfare. The pink “fattening pigs” are not hardy enough to be kept on pastures all year round, among other things due to the fact that they have hardly any skin pigmentation and do not tolerate much sun. The solution is the hardy and outdoor-ready Black Alpine Pig, which had been extinct in Bavaria for over 100 years. He applied to the Italian protection organization “Pro Patronomio Montano”, which is committed to the preservation of genetic diversity in the Alps, for some of the few surviving animals and, after extensive testing, he was able to produce six piglets. In cooperation with the partner farmers, Franz Kuchlbauer from Ramsau (district of Berchtesgadener Land) and Sebastian Kettenberger from Tittmoning (district of Traunstein) the breeding of the Black Alpine Pigs was resumed.

Currently, there are forty black Alpine pigs roaming the grounds of two partner farmers of the Berghotel Rehlegg.