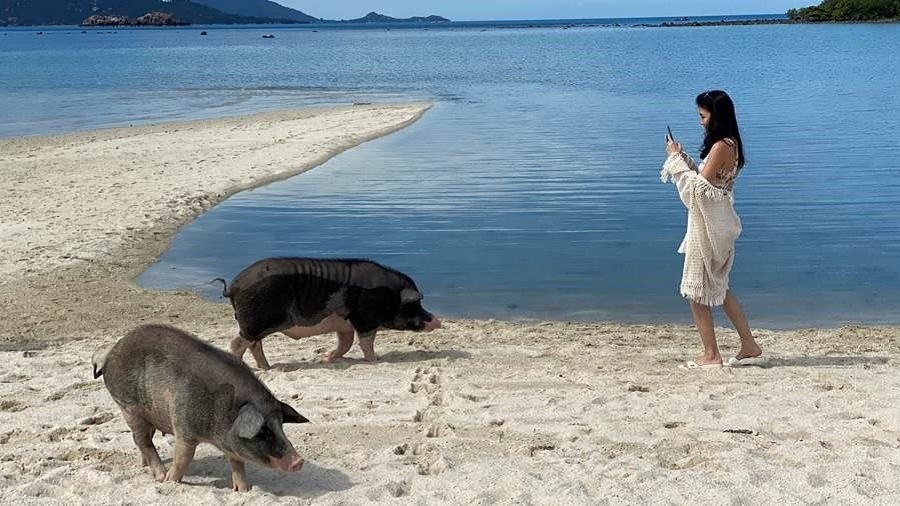 They’re not putting lipstick on the pigs of Koh Matsum, but tourists to this remote island are nevertheless dazzled by these barnyard staples that just keep hogging the limelight.

The tiny island is barely inhabited and is located about two kilometers off the south coast of Koh Samui. Two stories have evolved of how these affectionate piggies came to Koh Matsum. One is that they swam across from nearby Koh Taen—although that’s a 1km stretch of open sea. The other is that a certain Mr Kitt felt overwhelmed when he saw a small family of pigs at the market in Surat Thani on the mainland. He apparently couldn’t bear to see them given the chop, so he bought the litter and ferried them across to Koh Matsum where he released them. The family has since grown to about 12 and they are quickly becoming Instagram models for visiting tourists.

Boat trips to Koh Taen and Koh Matsum leave from several piers on Koh Samui, and a number of travel agents and hotels can arrange day trips.

One of the island’s most prestigious resorts, Banyan Tree Samui, offers a half-day tour in a state-of-the-art speedboat which can carry up to 12 passengers. The 4-hour trip includes snorkelling, swimming, snacks and refreshments. The speedboat, named Sense of the Sea, can also be reserved for a private tour with a festive picnic lunch.

“The islands are teeming with fish, rare birds, and even large monitor lizards,” said Banyan Tree Samui’s recreation manager Khun Phan. “However, the stars of the show are the friendly pigs who come trotting down to the shore as soon as the boat anchors. Children love them. They can pet the pigs as they roll around in the shallow water.”

He added that marine life and coral reefs have enjoyed an amazing resurgence due to the lack of tourism over the last year. Turtles, dugongs, sharks, and numerous fish species have replenished, and colorful corals have regenerated. So, while no one wants to see this Covid pandemic prolonged, those who are lucky enough to venture out into the Gulf of Thailand can enjoy a tranquil day at one with nature.

Banyan Tree Samui was in the news last year when a rare giant green turtle laid over 200 eggs in nests on the resort’s secluded beach. The nests were protected by the resort’s resident marine biologist who built a fence to protect them from predators.

The 5-star hotel has been singled out by global watchdog EarthCheck as meeting the highest standards for environmentalism in the country. It was recently awarded a Gold Certification for the third consecutive year – the only hotel in Thailand to receive this.

For reservations and more information, go to: https://www.banyantree.com/en/thailand/samui

ABOUT BANYAN TREE HOLDINGS LIMITED
Banyan Tree Holdings Limited (“Banyan Tree” or the “Group”) is a leading international operator and developer of premium resorts, hotels, residences and spas, with 47 hotels and resorts, 63 spas, 72 retail galleries, and three golf courses in 24 countries. Each resort typically has between 75 to 300 rooms and commands room rates at the higher end of each property’s particular market.

As a leading operator of spas in Asia, Banyan Tree’s spas are one of the key features in their resorts and hotels. Its retail arm Banyan Tree Gallery complements and reinforces the branding of the resort, hotel and spa operations.

Since the launch of the first Banyan Tree resort, Banyan Tree Phuket, in 1994, Banyan Tree has received over 2,600 awards and accolades for the resorts, hotels and spas that the Group manages. The Group has also received recognition for its commitment to sustainability for environmental protection and emphasis on corporate social responsibility.

In addition to its currently operating hotels, resorts, spas and golf courses, the Group currently has 21 hotels and resorts under construction, and another 25 under development.